This page serves two purposes: It provides a fairly detailed overview of the basic steps needed to image a surface and any scanning mode of the instrument, and more specifically, it explains how to image a surface in the scan modes where the probe tip remains in constant contact with the sample surface: Z Height, Broadband, and Lateral.

The basic steps required to image a sample are as follows:

These steps will be discussed in more detail below.

Powering up the System

Anatomy of a Probe: Commercially manufactured cantilevers are fabricated on wafers of silicon or silicon nitride using semiconductor industry technology, i.e., vacuum chambers, photolithography, sputtering, and ion beams. As manufactured, a single wafer will contain hundreds of 1.5 x 3.6 mm “dies”, each having a tiny cantilever protruding from one end. The dies are very difficult to manipulate by hand because of their size. For ease of handling, Ambios mounts the dies onto magnetic stainless steel mounting preforms, referred to as “crosses.” The crosses fit into a slot in the gold colored “probe holder” at the front of the scanner. The left and right edges of a cross are called “tabs.” It is easiest to manipulate a cross by grasping one of the tabs with tweezers. 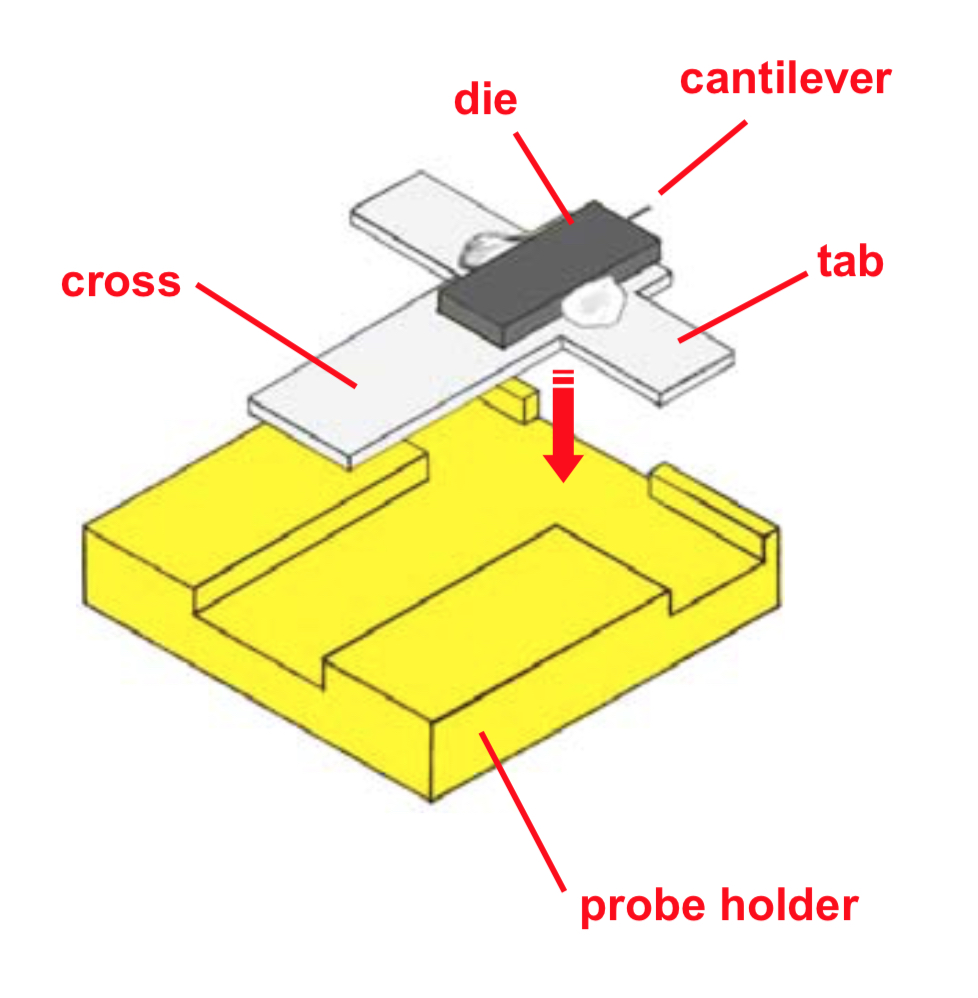 Throughout this manual the whole cross-and-die unit is sometimes referred to generically as a “cantilever” or “probe.”

Guidelines: SPM cantilevers fall into two classes: “Contact” type and “Intermittent Contact” type. The characteristics of the surface you wish to scan, and the type of surface information you wish to obtain, dictate which type of cantilever you will choose.

Contact-type cantilevers work best in situations where the material to be imaged is reasonably hard (e.g. metals, ceramics, most polymers) and the surface topography does not have abrupt edges or tall, steep features. They are less expensive than intermittent type cantilevers. And because there are fewer instrument settings involved in using them, imaging a surface with contact cantilevers is easier than with intermittent cantilevers. Anyone new to the field of SPM microscopy should definitely learn to operate the microscope with a contact-type cantilever first. In addition, contact cantilevers have the ability to detect lateral friction forces on the surface, when this type of measurement is desired.

Intermittent-contact cantilevers generally work well on all surfaces. They have the disadvantages of being more expensive and a bit more difficult to use, but they excel in imaging surfaces that are very soft (e.g. organics, polymer coatings) and surfaces with steep features. Intermittent contact cantilevers also have the ability to detect the elastic and adhesive properties of surface materials, when this type of measurement is desired.

The following steps pertains to the standard probe holder, which uses small magnets to hold the magnetic stainless steel cross in place. 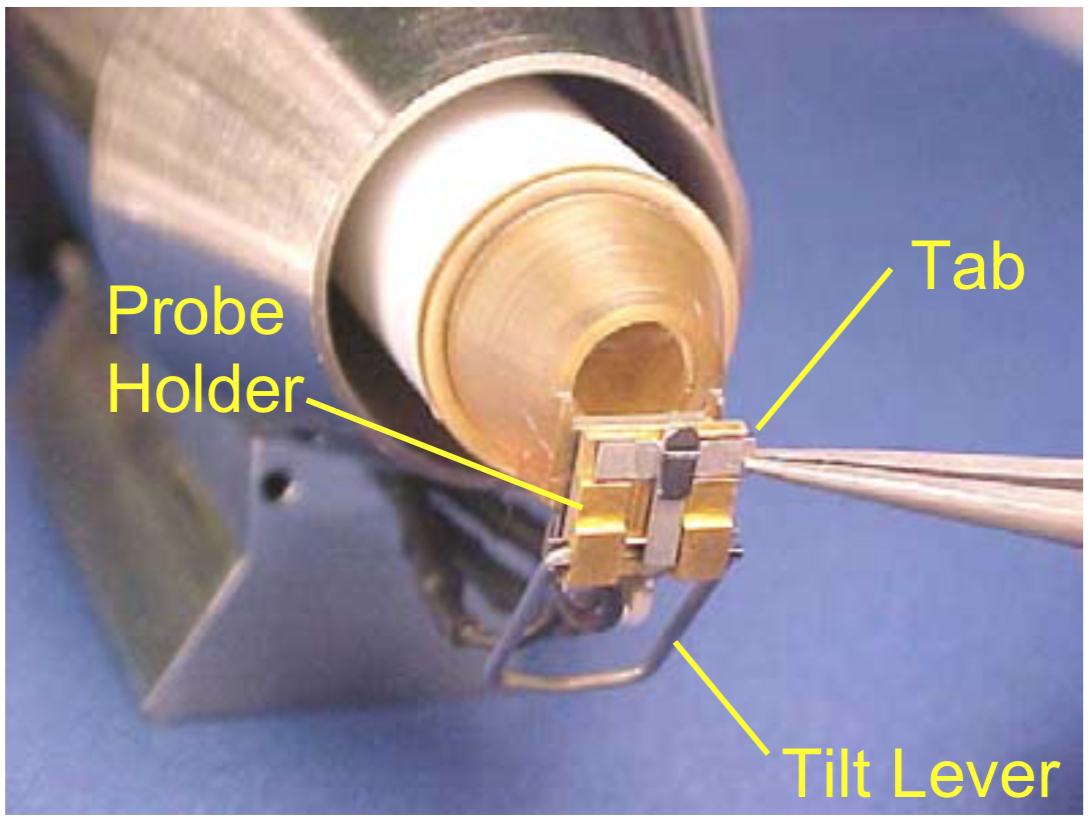 Note: When removing the scanner from the stage, take care not to bump or strike the probe holder, or the ceramic tube to which it is attached. Doing so may damage the PZT. 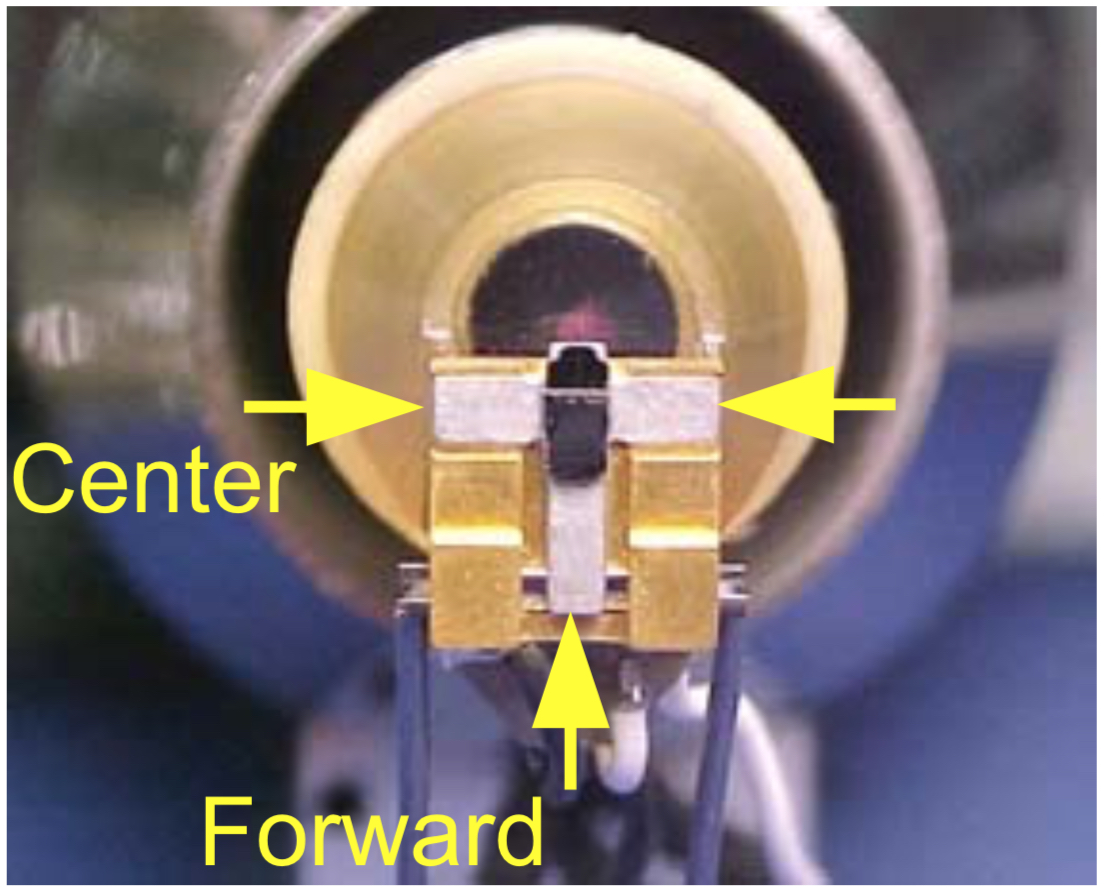 The following steps pertains to the optional nonmagnetic probe holder,

Note: Be careful. Over-extending the spring will permanently deform it.

Viewing the Probe in the Camera Window 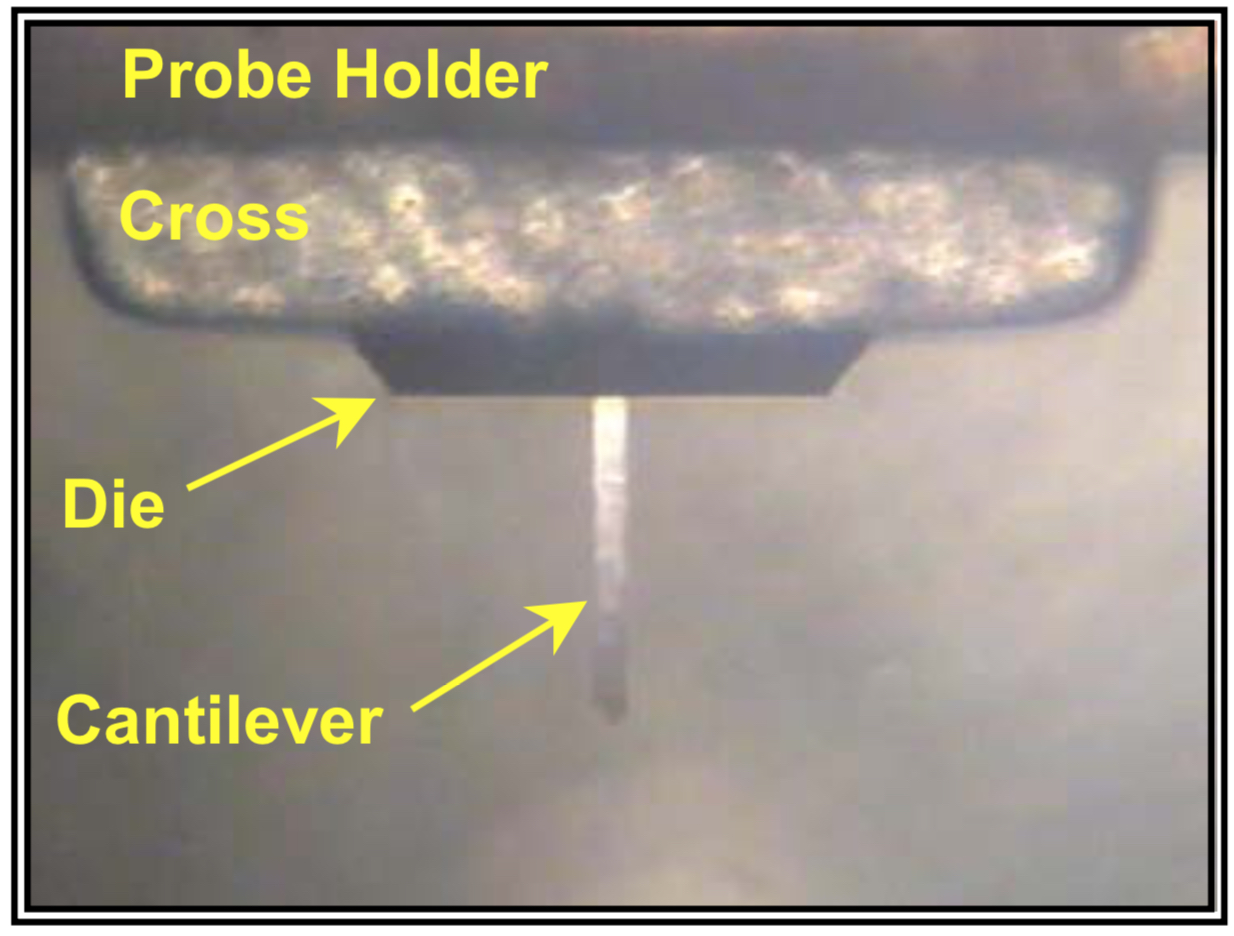 Compare the cross, die, and cantilever positions in the image above on the left to the image above on the right. Note that the cantilever is the only object in-focus. The front of the cross and the front of the probe holder are above the depth-of-field of the camera optics, and are blurred. The sample surface beneath the cantilever is below the depth-of-field, and is also blurred. The cantilever will appear more distinctly in the camera view when the surface in the background is at least partially reflective. For example, the cantilever tends to disappear against the flat-black surface of the XY translation stage, but it can be viewed much more clearly if a glass slide is placed on the stage.

The illumination of the camera view is adjusted with the light intensity slider control in the Probe Position window.

Note that as the light intensity is increased a point may eventually be reached where the video camera’s automatic brightness control feature will become active, and the camera view will not brighten even though the illuminator light intensity is increased. Avoid unnecessarily bright camera illumination settings. Doing so will reduce extraneous heating effects inside the scan head.

If the view is poor then follow the next three sections to improve the cantilever view. 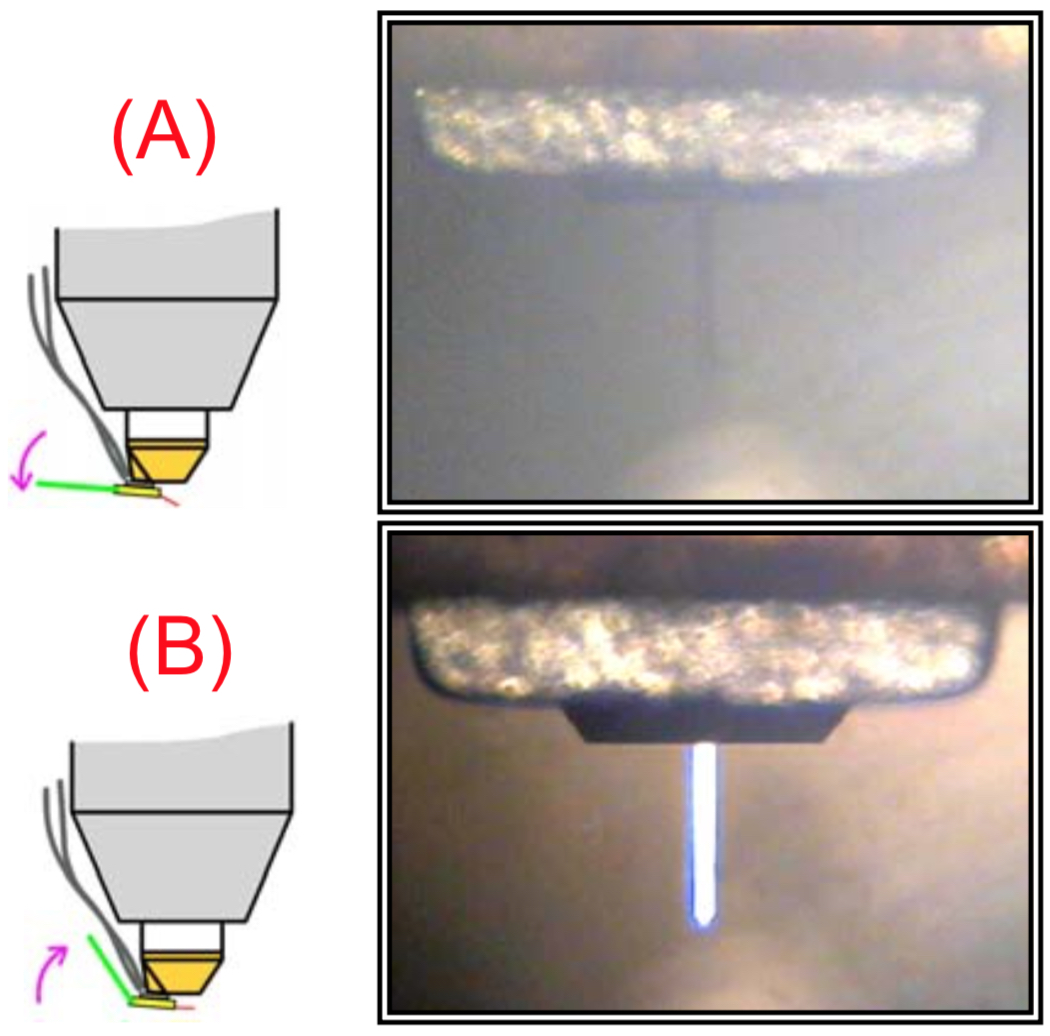 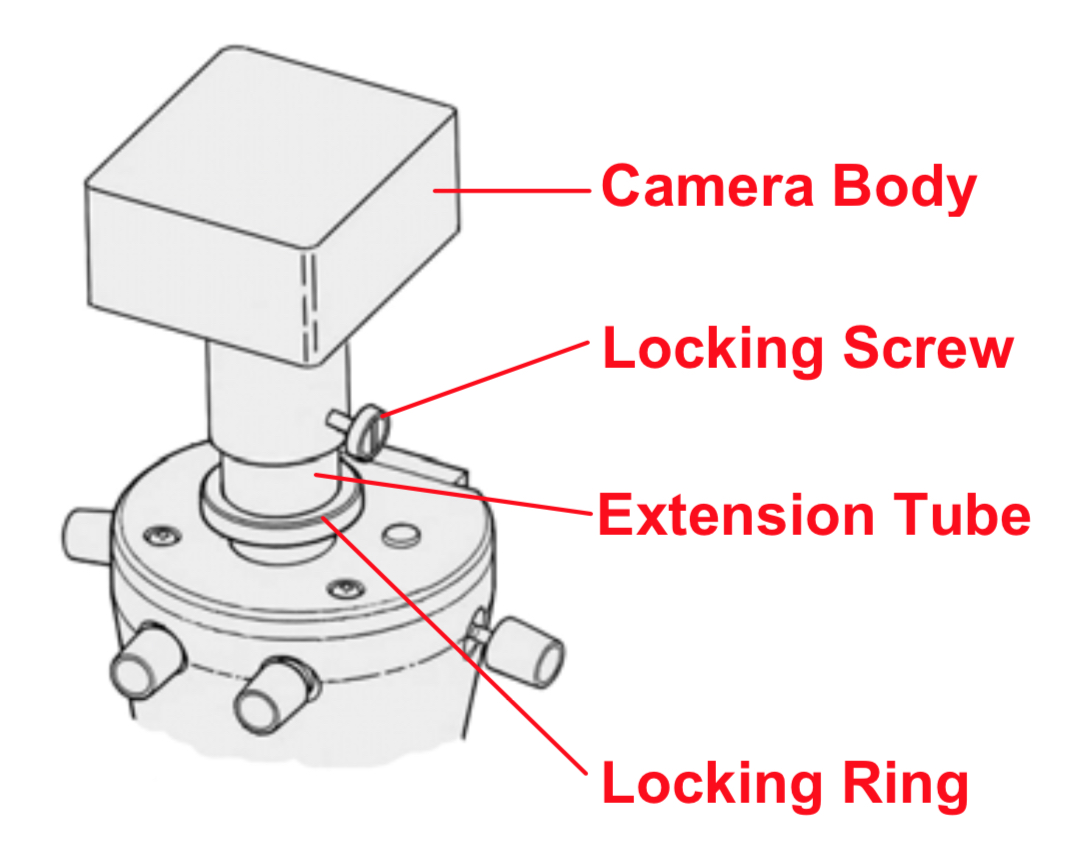 Centering the Camera View: The camera view is centered at the factory; normally it will not be necessary to adjust it. If for some reason the cantilever position becomes shifted out of place in the camera view, however, do the following:

The position of the cantilever is measured by bouncing a laser beam off of its mirror-like back surface and detecting the angle of the reflected light. Due to manufacturing variations between different cantilevers, and variations in how the cross is inserted into the probe holder, it is necessary to adjust the laser optics every time the cantilever is changed.

There are three basic steps to aligning the laser optics of the scanner. 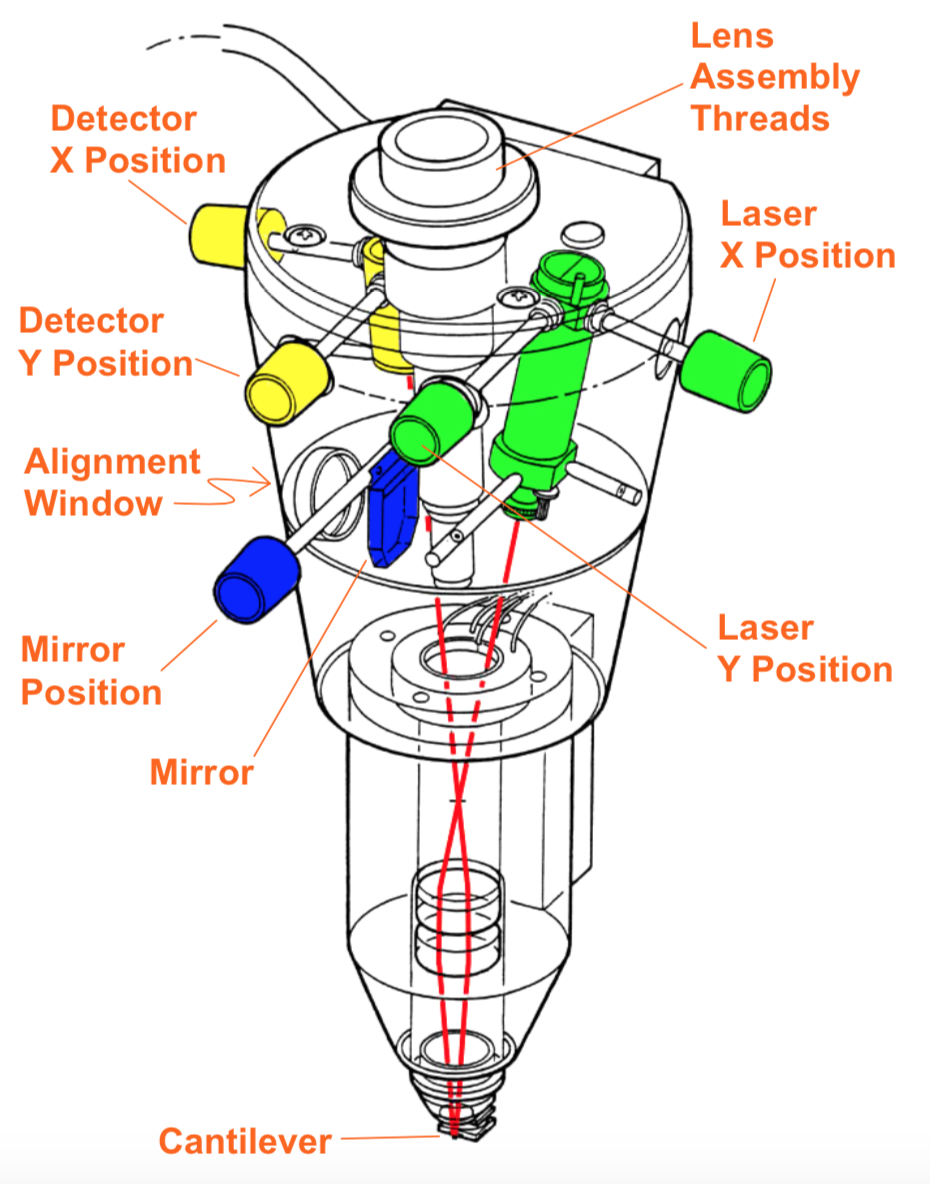 To direct the laser beam onto the back of the Cantilever perform the following, 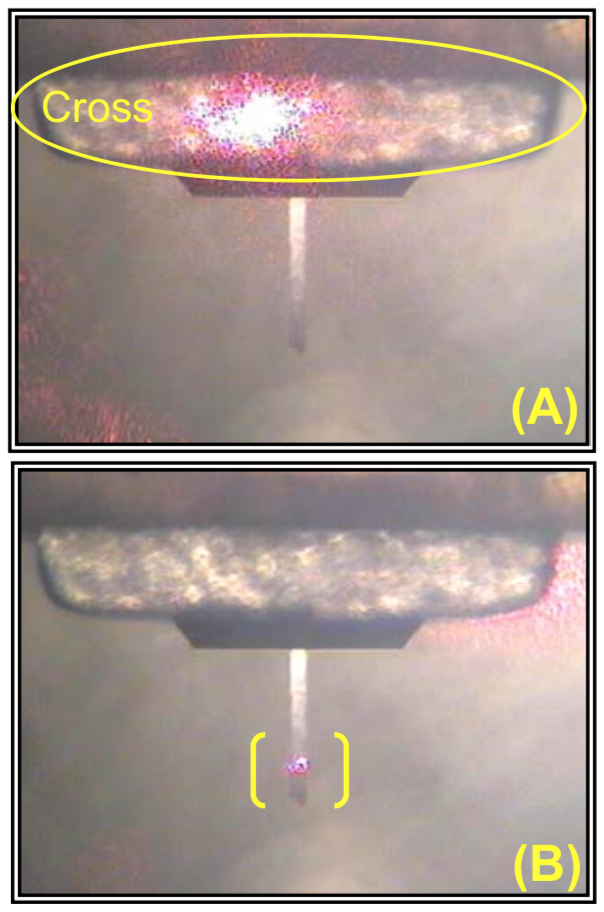 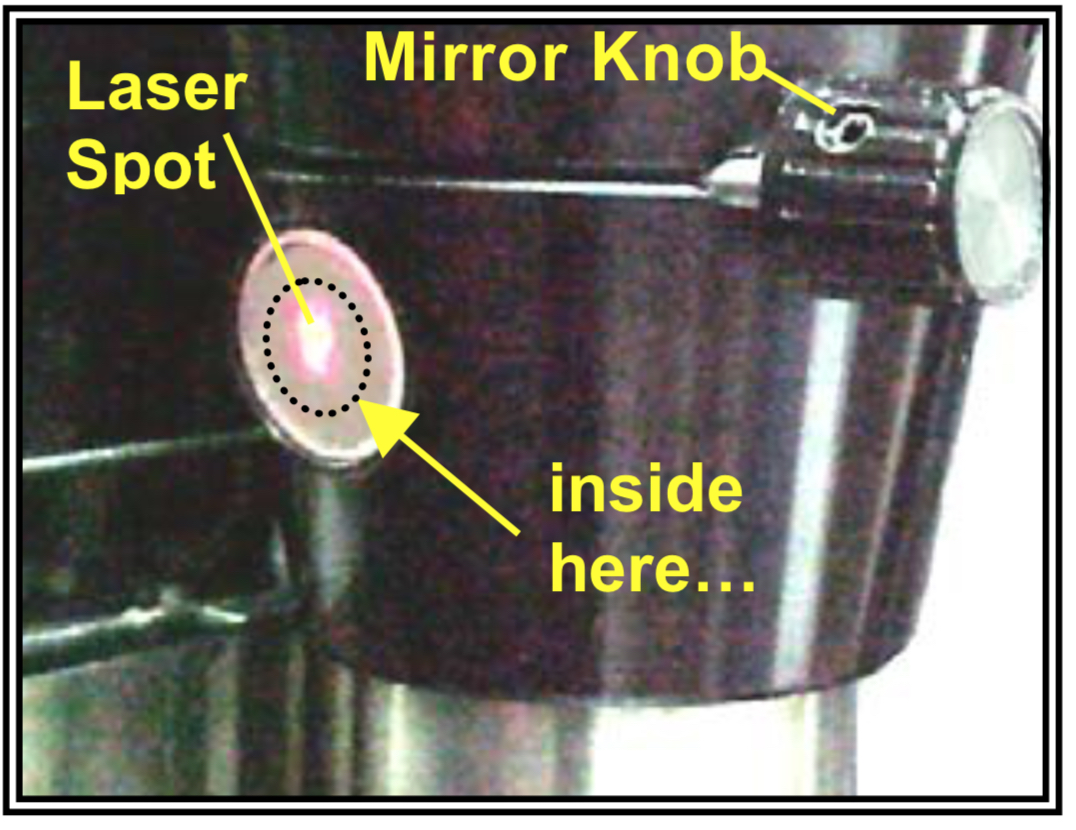 If adjustments are necessary to bring the laser spot within the acceptance circle it is usually sufficient to just move the laser spot laterally. This is accomplished by adjusting the tilt of the cantilever. Refer to the main diagram. Move the tilt lever at the back of the probe holder up or down slightly as necessary to reposition the laser spot in the alignment window.

Adjusting the Optical Detector Position follow the steps below, 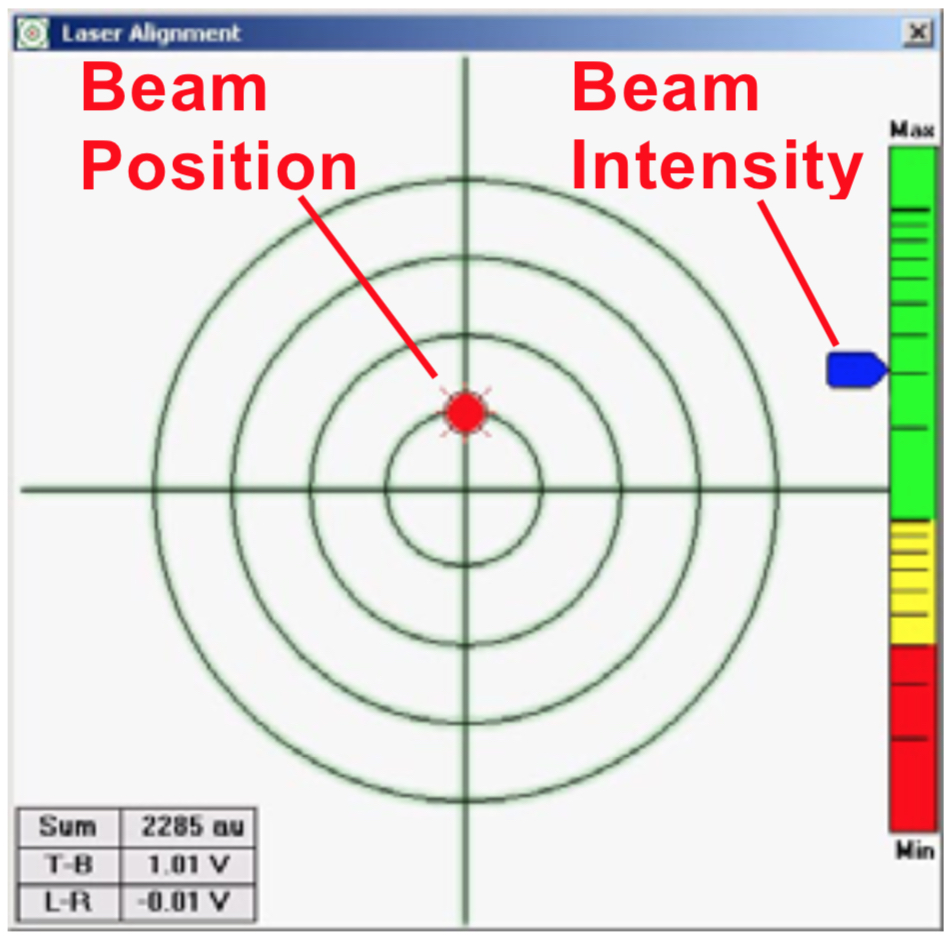 The scan parameters in the SPM Configuration window determine where and how an image is obtained. To achieve the best imaging results it is important to choose the most appropriate scan parameters for the sample being studied. This can get a little tricky so you are encouraged to ask a Manager for help during this step!

You will need to set several parameters in this step. See the image below for a basic outline of the different options you can set in the SPM Configuration window, 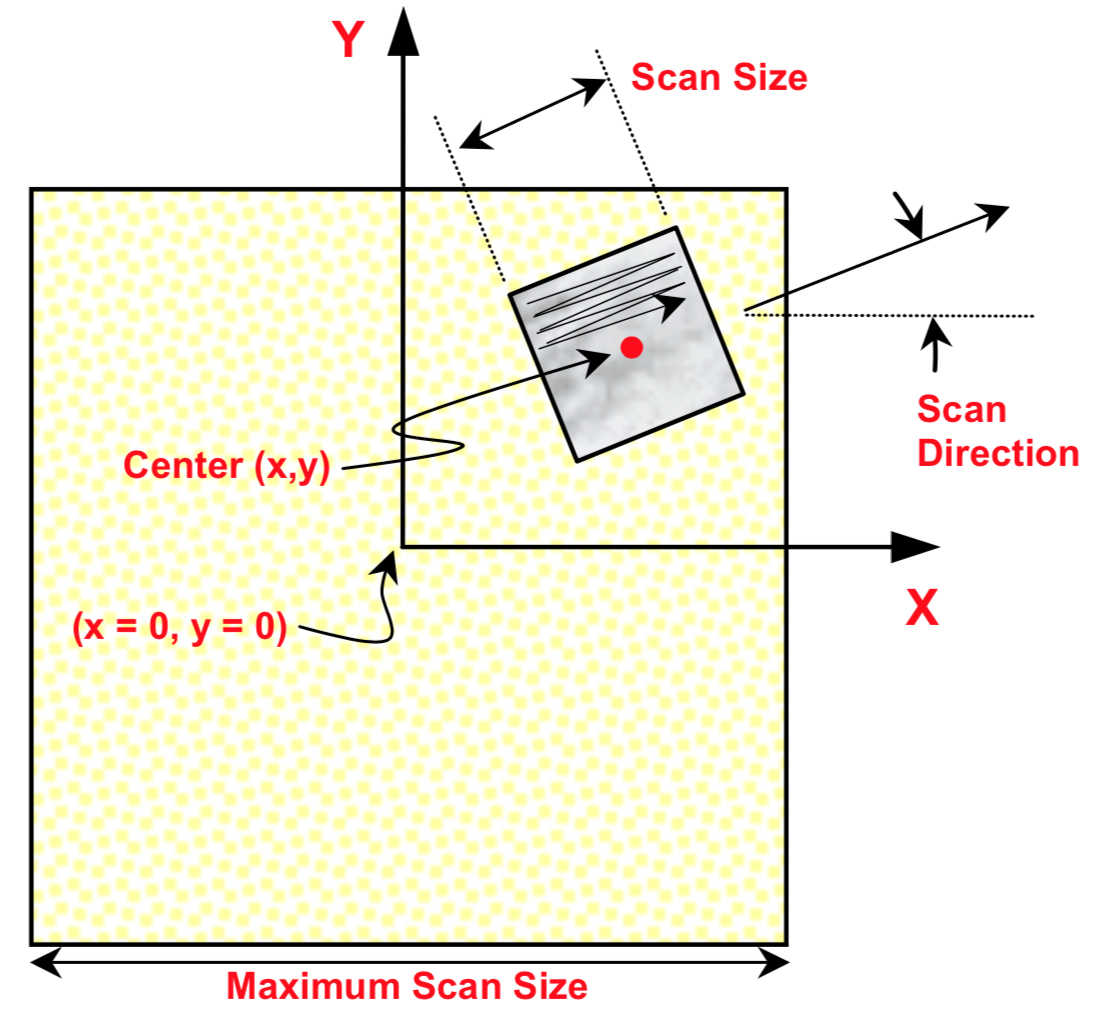 Below is the SPM Configuration window, 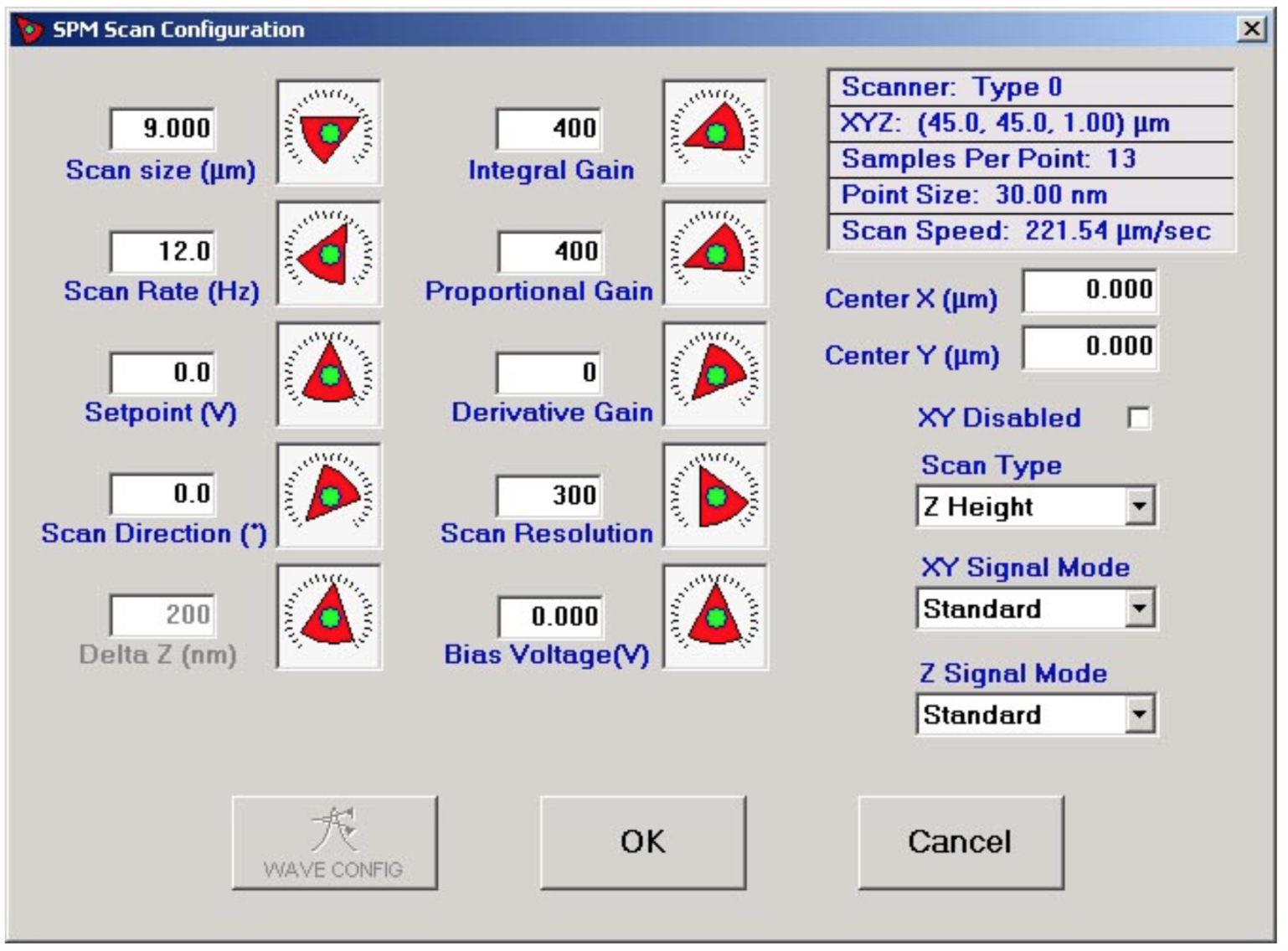 The dial controls work by the click and drag method: position the mouse cursor on the tip of the pointer of a dial, hold down the left mouse button, and rotate the pointer until the desired parameter value appears in the window. To increase the resolution of the rotary adjustment the cursor can be moved further from the center of the dial while the mouse button is held down.

The functions of the various controls in the SPM Configuration window are explained below. NOTE: some controls may be disabled at times, depending on the mode of operation of the microscope.

The scan parameters in the table below are a starting point for first-time work in Z Height imaging. Once reasonable images have been obtained with these settings move on to the next step of experimenting with the settings to get a feel for the instrument.

The parameters with the most ‘mystery’ in the table above are the Proportional, Integral, and Derivative (PID) gains. Learning to adjust these parameters for the best performance of the microscope requires practice. It takes a while to develop intuition as to what settings work best in a given situation.

Here are some guidelines to get started:

Engaging the Probe with the Sample Surface

For more detail on the basic steps continue reading the Positioning the Sample, explanation of the Engage Window, and for additional information about engaging the probe. 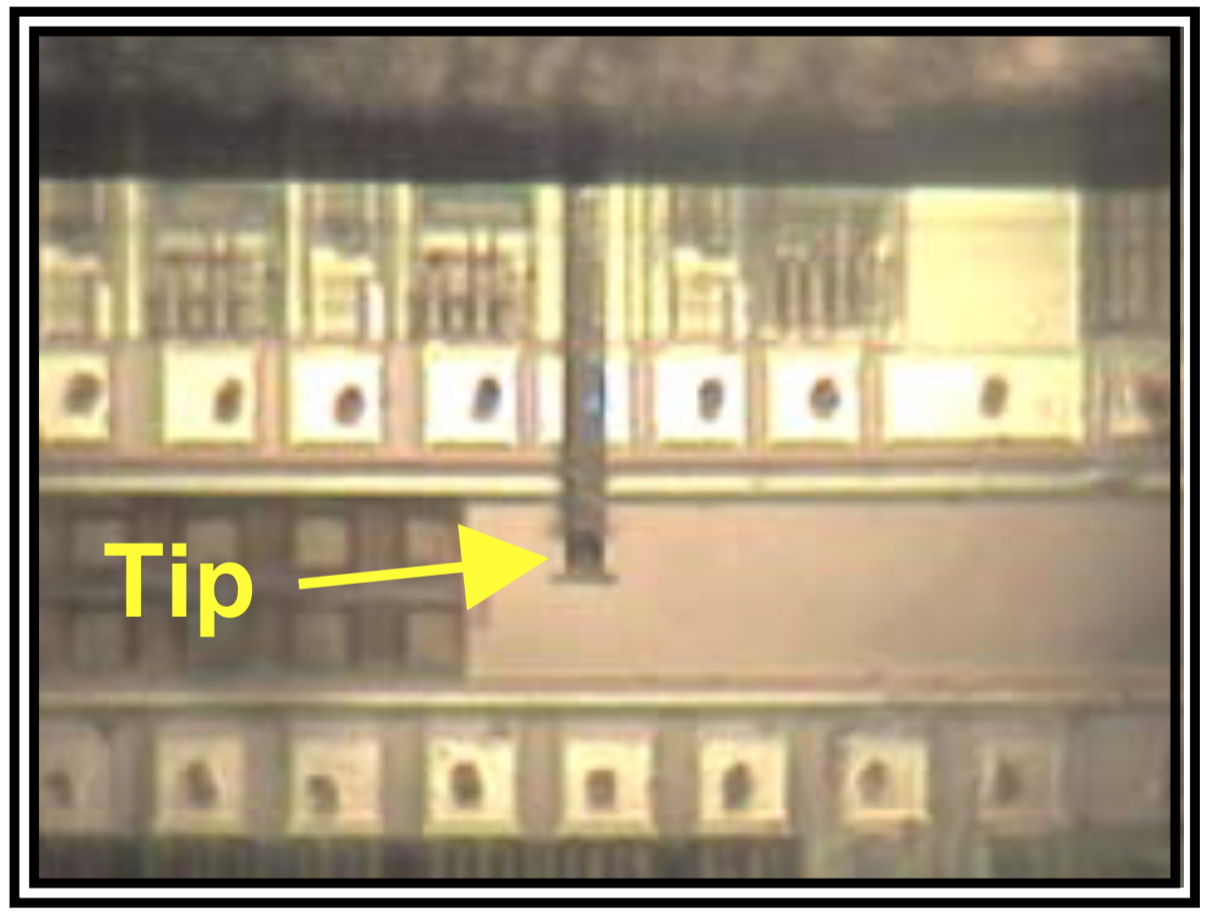 Below you can see the Engage Window, 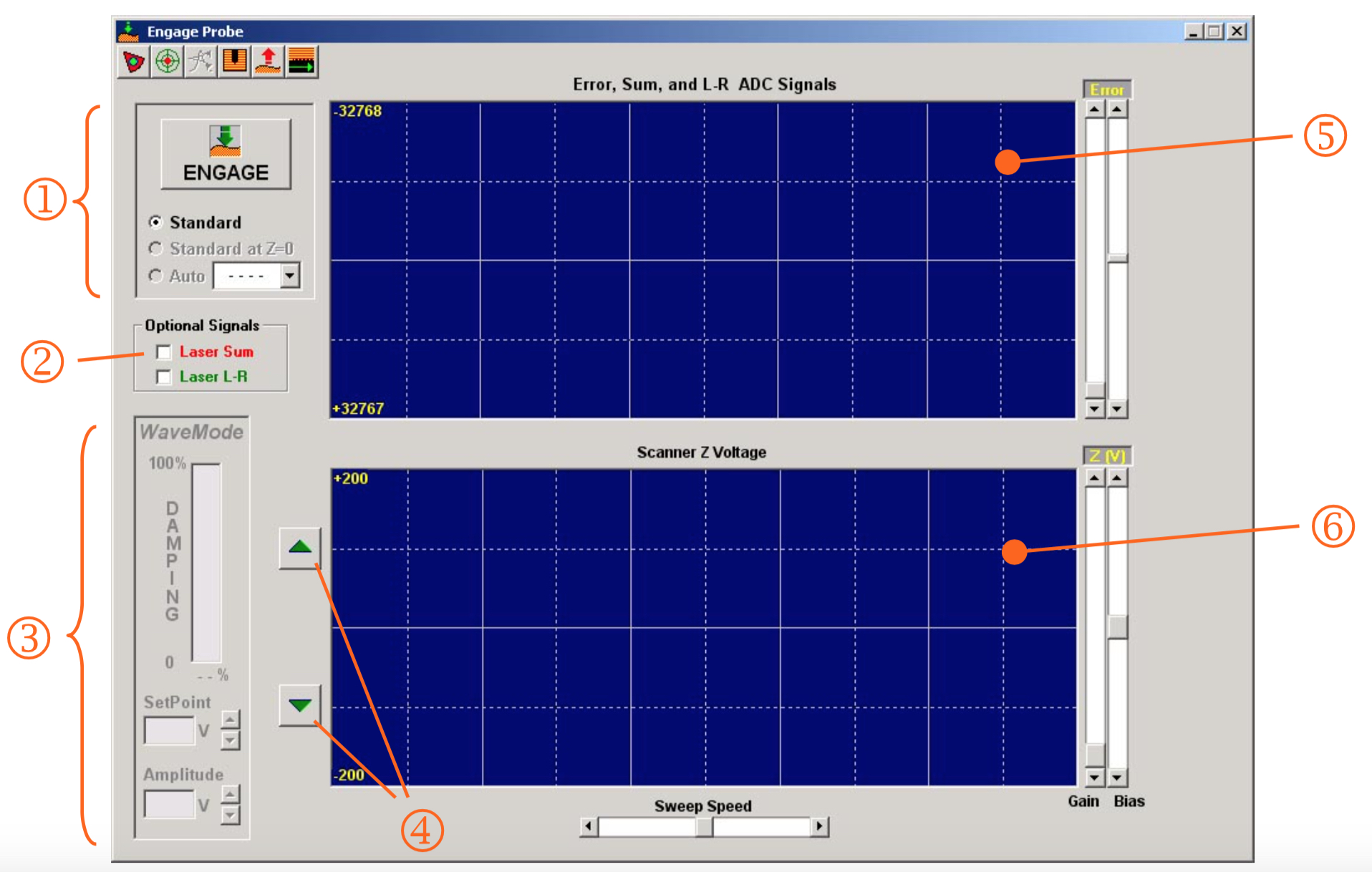 The major elements of the Engage Window are as follows, 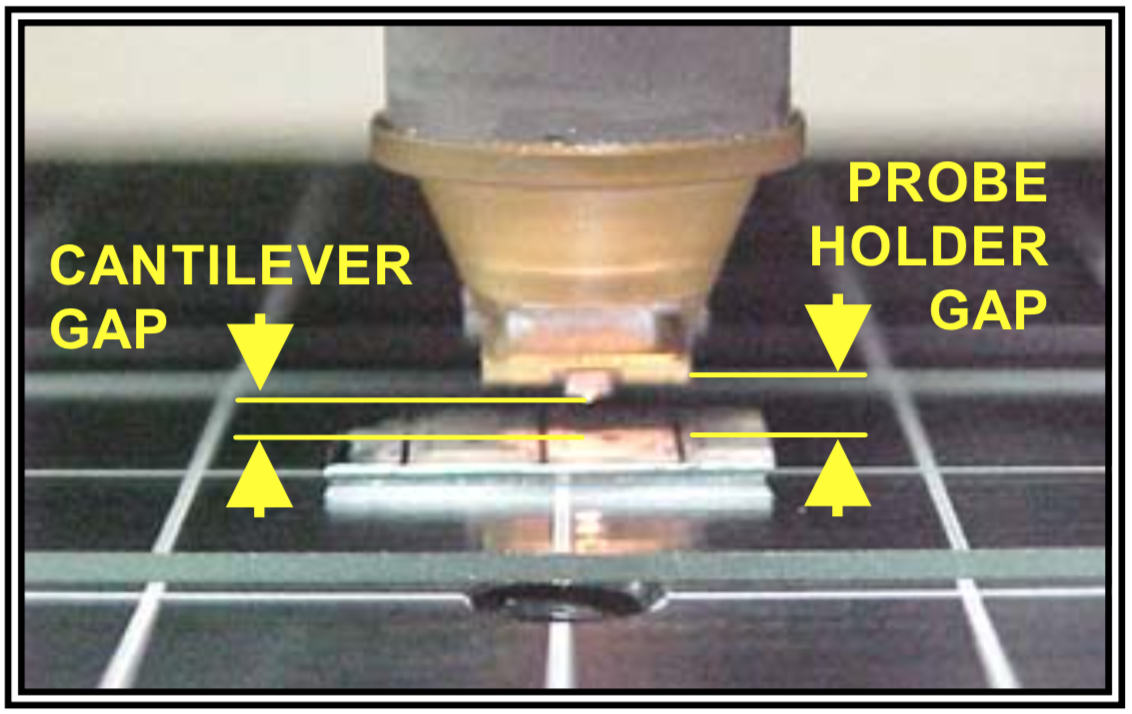 The shape of the traces seen in the Engage window before the probe contacts the surface are indicated in time interval A of the image below. 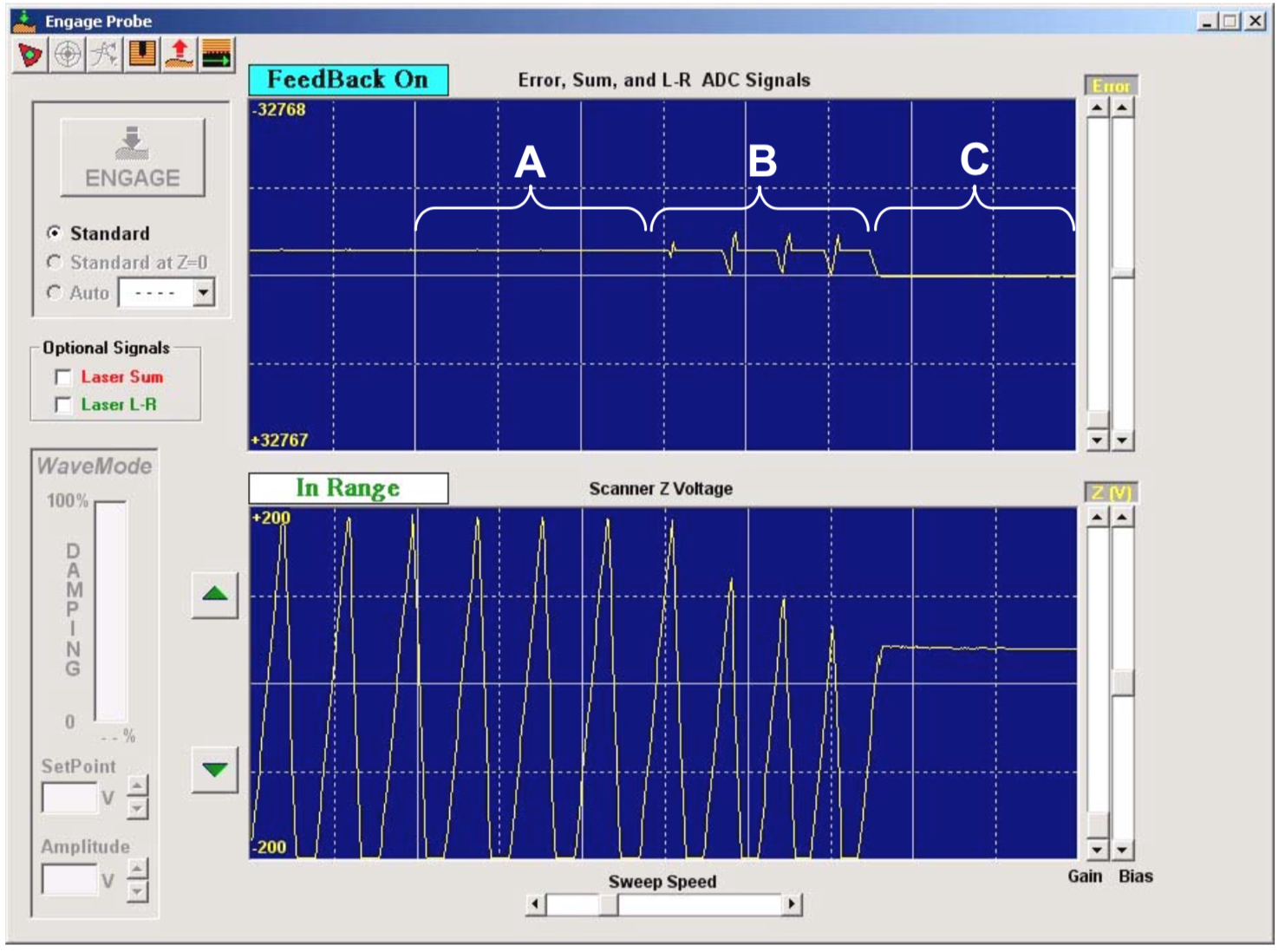 The relatively straight line in the top graph indicates that the Z feedback loop has a constant positive error voltage, corresponding to the system state with the probe too far above the sample surface. The sawtooth pattern in the bottom graph indicates the expansion and contraction of the z piezo section of the scanner.

After the probe contacts the surface (interval B) the error trace should drop to zero (interval C) indicating that the Z feedback loop is actively keeping the loop error at zero, as it should. The message “Feedback On” will appear above the top window as a second indication that the Z feedback loop is active. The bottom trace should level off, and you should see the message “In Range” flashing above the lower graph. This indicates that not only is the feedback circuit active, but the expansion/contraction of the tube is within the total vertical range available to the scanner for imaging.

Additional Info about Engaging the Probe:

YAY!!! Now that you’ve set everything up you’re able to collect your images! First let’s get familiar with the The Realtime Scanning Software. All surface imaging is performed from the Realtime Window. More information not explained above about the various menu controls in the Realtime window is presented in the PDF Manual in Chapters 4, 5, 7, and 8.

The major elements of this window are labeled below, 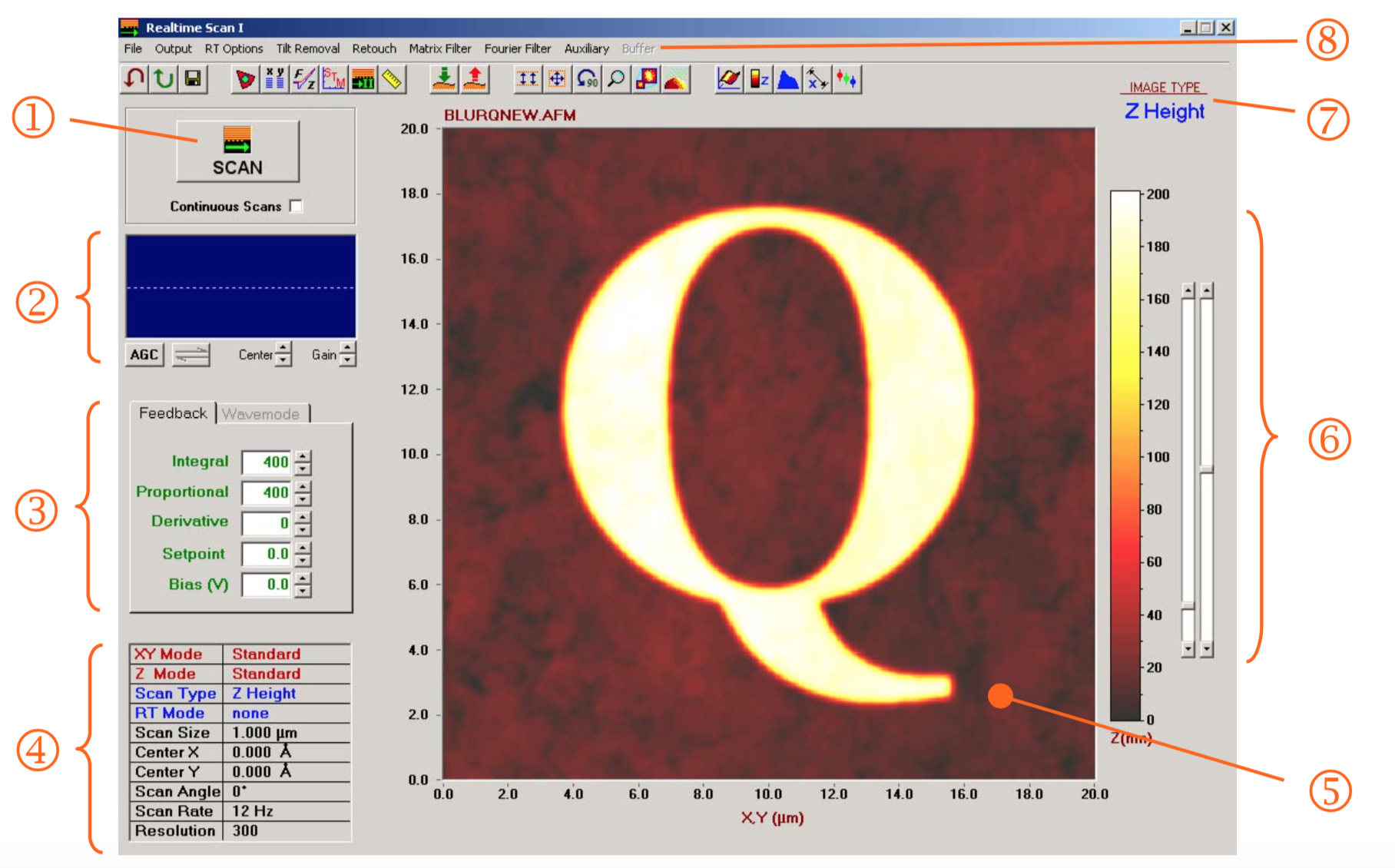 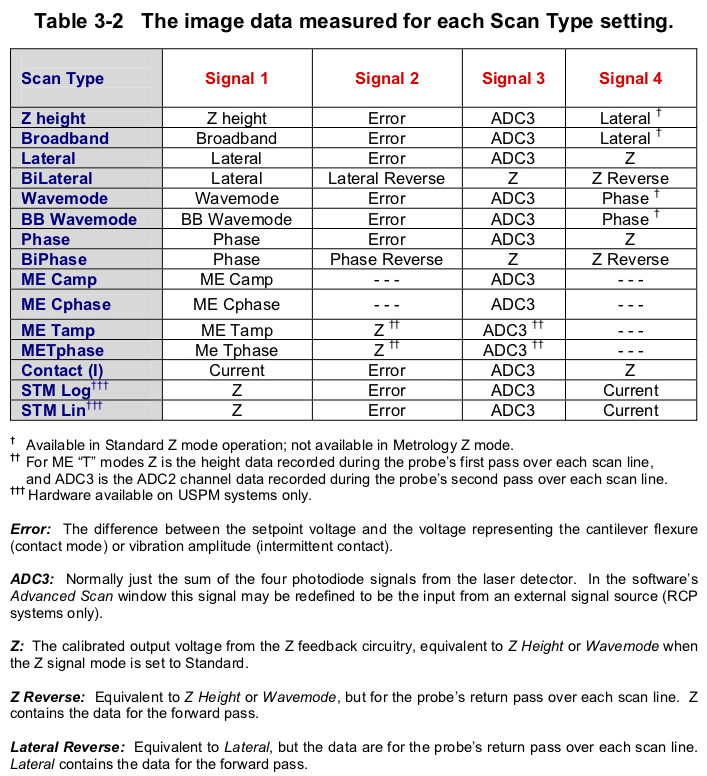 At this stage of the process the probe should be in contact with the surface, and the system set and ready to scan.

Whenever the Scan Type is changed at the SPM Configuration window the Image Type variable will always reset to Signal 1. So, for a Z Height scan type setting, the system will initially display Z Height image data when the Scan button is pressed.