What is Scanning Probe Microscopy? 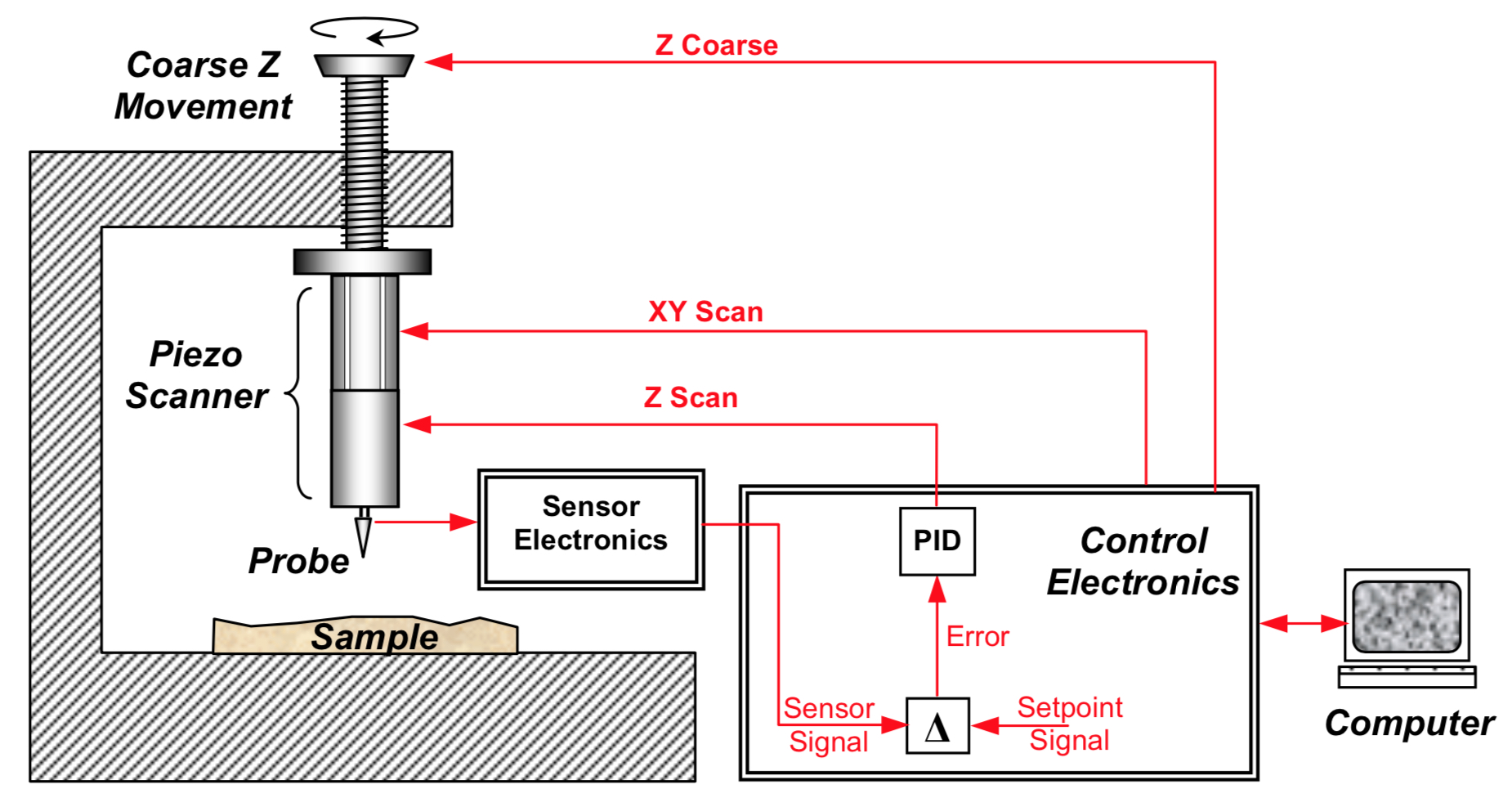 The function of the building-block components in the image above are described below.

Because of its central role in the ‘scanning’ part of scanning probe micrososcopy, a brief overview of the principles of operation behind the piezoelectric scanner is helpful. Piezoelectric materials have the property that they can be polarized by an electric field at high temperatures, so that when a voltage is applied to the electrodes on the piezoelectric material at room temperature it can be made to expand and contract very small distances (see below). Any mechanical device of this sort is called a position transducer— a mechanical device that converts a voltage into a mechanical displacement. 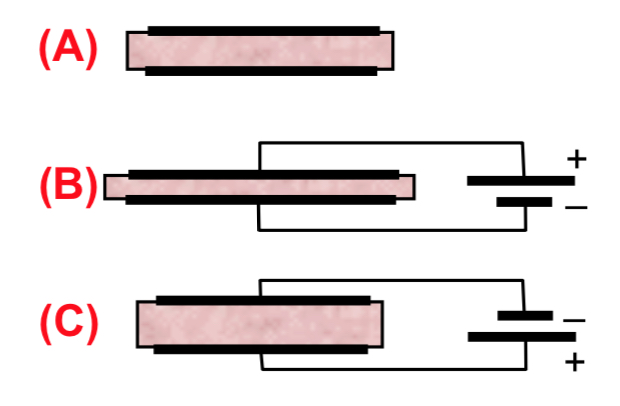 Piezoelectric material can be formed into any shape. The shape most useful for the SPM scanner is a thin walled cylinder. Imagine taking the rectangular plate in the image above and curling it into a cylinder. As indicated in the image below, applying a voltage between the electrodes on the inside and outside surfaces of the Z cylinder will make the cylinder expand or contract axially, which would move an attached probe up or down.

The XY motion of the piezo scanner is obtained by splitting the inside and outside electrodes on the cylinder walls into quarter sections, as shown in the righthand side of the image below. By applying equal voltages to opposing electrode pairs with reversed voltage polarity, one side of the tube can be made to stretch and the other side contract. This bends the tube sideways. The sideways bend produces the x-axis motion of the probe. The y-axis motion is produced similarly with the other two pairs of electrodes on the XY piezo.

The Probe and Sensor Electronics

Now let’s look at the ‘probe’ part of scanning probe microscopy. There are several mechanisms which can be used to sense the probe’s proximity to a surface. Two of the most common sensing mechanisms, STM and AFM, are described below as examples.

Historically, STM is the first of the modern scanning probe microscope techniques. It was invented in the early 1980’s, and its development ultimately led to the Nobel prize in physics for its inventors.

The tunneling sensing mechanism is extremely sensitive. The sensor signal changes by about a factor of 10 for every Angstrom change in the vertical height of the probe, giving the STM imaging technique an extremely high position sensitivity. Atomic-scale resolution is readily obtained in this way.

STM is not an all-purpose imaging technique, however. It has the serious disadvantage of requiring the probe and the surface to be electrical conductors, and these surfaces must be very clean, free of oxides and other contaminants. These restrictions make STM unsuitable for general purpose in-air laboratory imaging requirements.

The AFM imaging technique uses a microfabricated cantilever with a small sharp point protruding from its underside. The position of the probe point is measured via the deflection of a laser beam which is reflected off of the back side of the cantilever (see below). 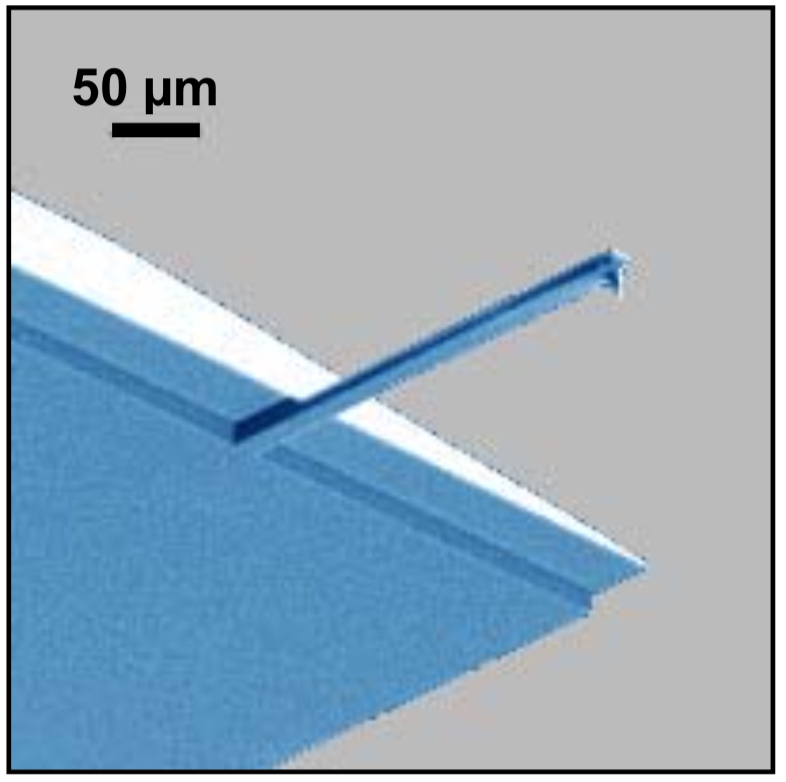 As the cantilever moves up and down the position of the laser spot on a split-diode photodetector changes, producing top T and bottom B photocurrents in the top and bottom diodes. The difference in these currents, T-B, indicates how much the cantilever bends. 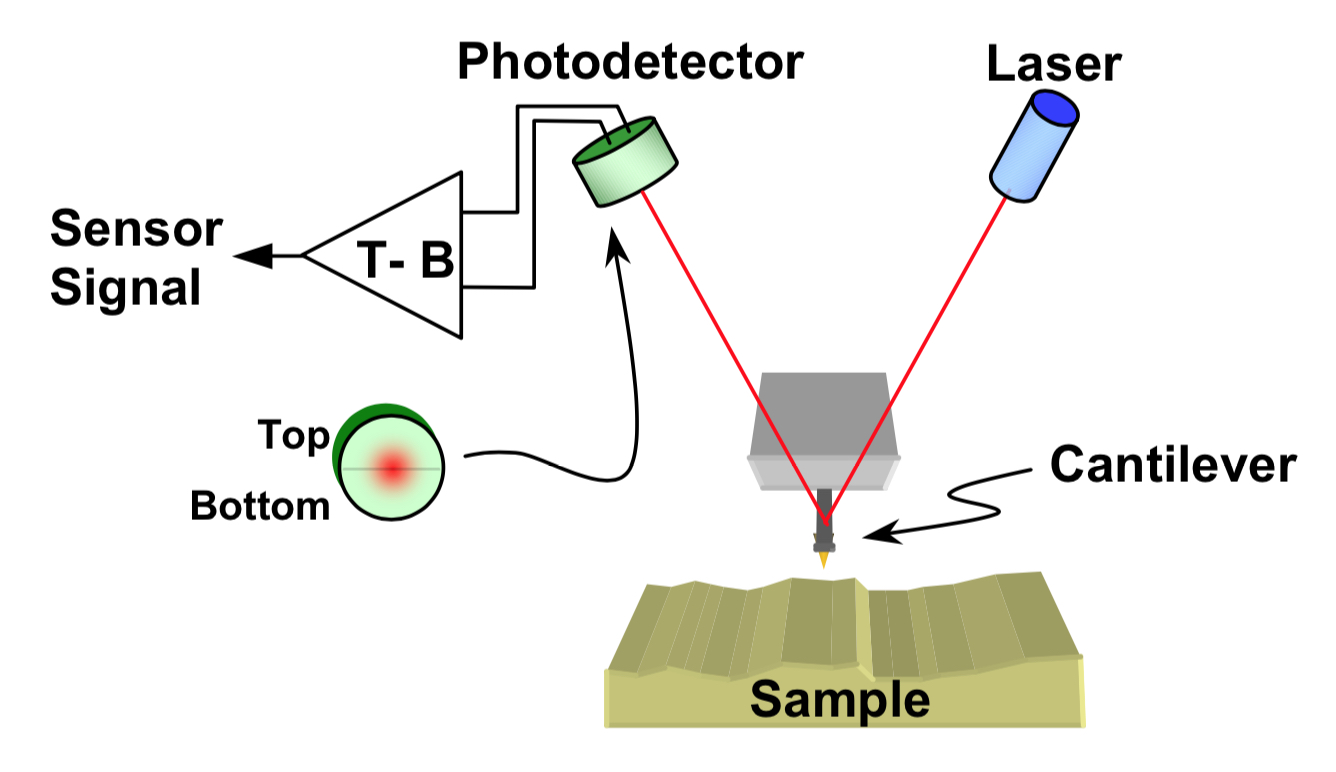 The ultimate limiting factor which determines the image resolution achieved with an SPM probe is the sharpness of the point.

Ideally, the probe is in the form of a very narrow angled cone, terminating with just a small cluster of atoms at the apex of the cone. The small cluster of atoms at the apex will give the probe sufficient lateral resolution to image the atomic lattice down into crevices of the surface, and scan very close to the vertical walls of step-shaped features on the surface.

In reality, the probe tip is normally not nearly so sharp, and the cone angle is not nearly so small, and these factors may compromise the quality of the image obtained. The condition of the probe point is of paramount importance in obtaining the best quality images from an SPM instrument.

The SPM in Action

This is an overview of how an SPM works. We start with the probe far away from the sample surface (several millimeters), so there is ample room to slide the sample under the probe. Then with the Coarse Z Movement mechanism the probe is brought close enough to the surface to interact with it.

Once the Coarse Z Movement mechanism has done its job, the vertical position of the probe is controlled by the ‘z feedback control loop’, or ‘z servo loop’. The loop consists of these parts: the z section of the piezo scanner, the probe and sensor electronics, the setpoint voltage, the error voltage calculator, and the PID control circuitry. In order to understand how the z feedback control works its best to just jump in and see what one component is doing, and then follow this component’s output to the next component in the loop to see how it responds, and continue the analysis of the actions of each subsequent component in the loop until the effect returns back to the first component considered.

So, the difference between what we say we want the probe state to be (Setpoint Signal) and what the probe sensor reads as the state of the probe (Sensor Signal )is the error in the feedback control (Error). The error signal goes into the ‘intelligence’ of the servo mechanism, called the PID controller. The PID controller decides how to respond to the error signal, i.e., how fast and in what direction to change its output voltage (Z Scan). For example, if at some point in time the error voltage is high, indicating the probe is too far from the surface, then the PID will slew the Z scan voltage to a more positive value to cause the z piezo to gradually expand. As the z piezo expands the probe is lowered closer to the surface, and the error signal gradually decreases, eventually reaching a value of zero. At the instant in time that the error reaches zero the PID stops changing the Z Scan voltage. The z feedback loop has reached its goal: the probe is in the state we’ve defined via the Setpoint parameter.

The action of the z feedback loop happens very rapidly, so at any instant in time the Z scan voltage has been adjusted to keep the error voltage very close to zero. An image of the surface topology is produced by rastering the probe across the surface in a series of scan lines to gradually map the profile of a square region of the surface. As this rastering takes place the z feedback circuitry continually raises and lowers the probe to track the surface with a constant sensor signal. Provided that the Z piezo expands and contracts linearly as the applied voltage changes, the Z Scan signal will be proportional to the actual vertical profile of the surface. The surface image is formed by measuring the Z Scan signal, converting it into its equivalent height by multiplying by an appropriate conversion factor (so many μm height per so many Z Scan volts), and then plotting the result as a color bitmap on the computer screen. Each pixel in the bitmap corresponds to a point in the xy raster of the probe, and the vertical height of the surface at that point is represented by an entry in the color palette, usually set up so that ‘higher’ means ‘brighter color’.